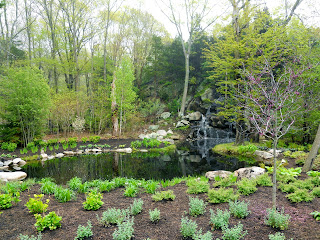 Last fall I consulted with an English couple who had recently relocated from Dubai to Scituate Massachusetts. Although Scituate is a coastal town, their home was not located on the waterfront. The previous owner, however, had excavated a large pond in a naturally wet area at the back edge of their sizable property. Dramatically sited against a rock out cropping, at one time a waterfall had tumbled down the face of the ledge into the first of a pair of connected pools. 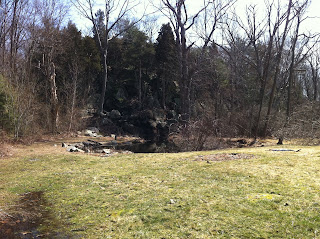 When I arrived at the site, however, the waterfall was no longer working and the pond was surrounded by nothing but lawn, brambles, and a tangle of weedy vegetation. My clients were eager to restore the waterfall 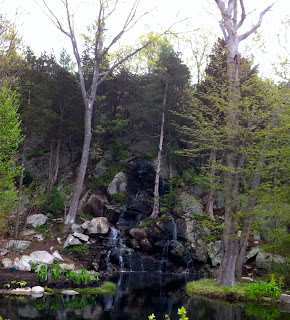 and I suggested that we frame the pond with a broad expanse of moisture loving ornamentals. 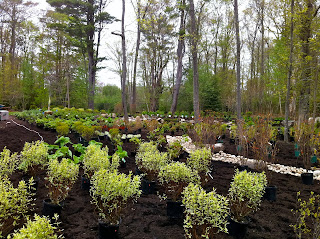 By their very nature projects like this often require an element of improvisation. When we broke ground this spring the area that I had mapped out for the garden was much wetter than I had expected, making excavation and soil preparation quite difficult. Luckily I had hired Mike Downing of Downing Northeast , a talented can-do contractor with whom I had worked on a number of other occasions. We decided to install a visually appealing rock-lined stream bed to concentrate the water in what had once been a natural run off. 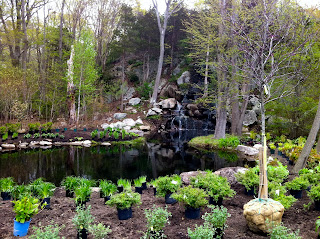 Much of the existing soil was heavy clay, whIch I amended with more than sixty yards of compost. Clay is nutrient rich, but difficult for most roots to penetrate. Adding large quantities of organic matter helped to break up the clay thereby creating a better growing medium. In the process of preparing the beds we moved a number of large boulders and reset them along the water's edge, further integrating the pond with the rock outcropping. In keeping with the naturalistic feel of the site I planted the new beds with large groups of  moisture loving shrubs including Summersweet (Clethra Alnifolia), Swamp Azalea (Azalea Viscosum), American Winterberry (Ilex Verticillata), Cornus Ivory Halo (a dwarf variegated red-twig dogwood) and High Bush Cranberry (Viburnum Trilobum). I also included broad sweeps of ferns, hostas, astilbes, Japanese irises and other perennials. In the drier areas I installed masses of hydrangeas and potentillas. It may take a few years, but I'm confident that the new plantings will create a lush frame for the pond, much like farm pond at my house albeit at a much larger scale. 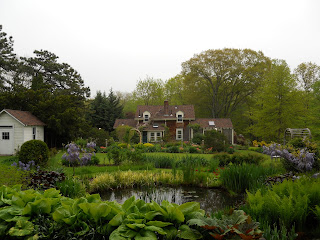 Meanwhile, here in Seekonk the vanilla scented Clematis Montana Rubens that I'm training over the roof is in full bloom 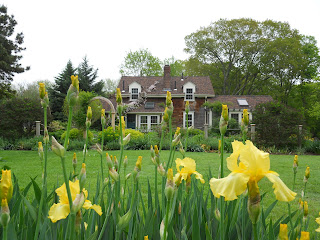 and the white azaleas are in putting on quite a show. 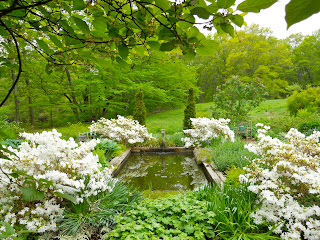