Confessions of an Impatient Gardener 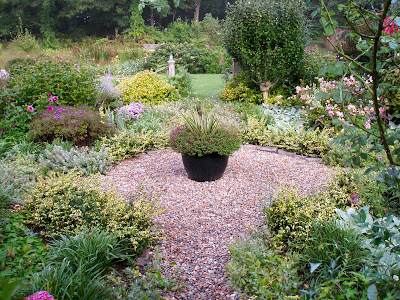 When I initially sat down to work on another installment of "A Year In the Garden", I had intended to discuss the various plants that are contributing autumnal color to the gardens here in Seekonk. I selected most of the photos accordingly and have included them despite the fact that, instead of my original topic, I've decided to write about something all together different. The time has come, I think, to make a confession. 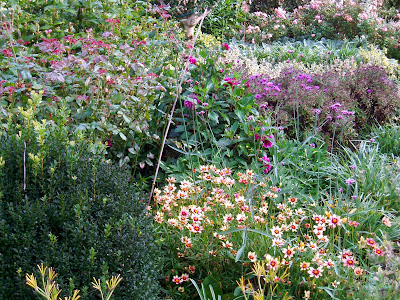 When designing for clients, I make it a rule to meticulously research the ultimate heights, widths, and invasive tendencies of the plants I recommend. I deemed such rigorous investigation necessary after learning a terrible lesson the hard way. Many years ago I added Artemisia 'Silver king', a lovely plant with filigreed silver foliage, to a client's perennial border. In less than a year its invasive stems had run rampant throughout the entire garden. I bloodied my hands tearing it out piece by piece and vowed never to make the same mistake again. Yet, despite years of experience and public lectures in which I have cautioned my audience to carefully consider the mature stature and habit of any plant before making a purchase, the truth of the matter is that I don't always "practice what I preach". Visitors strolling through my property would be well advised to take heed of the old adage "Do as I say, not as a I do" because, in truth, some of my more impetuous decisions have been motivated sheerly by impatience and the ill-advised pursuit of an instantaneous effect. 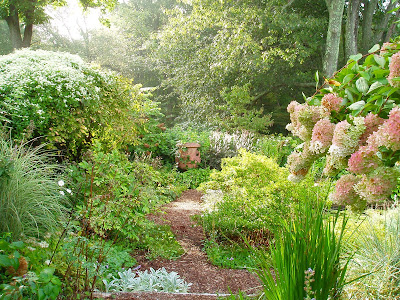 As portions of the gardens here in Seekonk have passed their tenth season the folly of my ways has become more apparent. The hedge of Leyland Cypresses, that I installed because of their notoriously rapid growth, has started to encroach on the garden it surrounds. For the first few years the trees created a lovely feathery screen. Guests invariably gasped in admiration upon hearing that the impressive trees had been only five feet tall when first planted. Unfortunately, to the detriment of other shrubs and perennials, the leyland's wide-spreading upper branches are now casting shade where none is desired. Meanwhile the lower branches have started to thin out, exposing the driveway they had been planted to conceal. In hindsight a slower growing and more compact evergreen would have been a much better choice, but I was in such a hurry to create an instant effect that I turned a blind eye to the future. 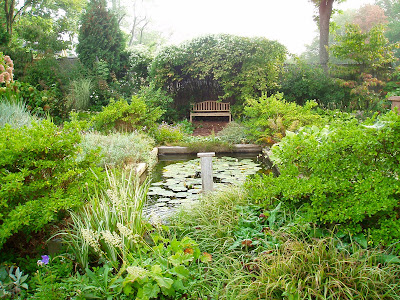 A similar problem has occurred with the Moonglow Junipers that I planted in the hot colored garden nine years ago. What were once striking, golden-needled accents have metamorphosed into flat topped gargantuans the size of which has thrown off the proportions of the entire garden. Unlike the Leyland Cypresses, whose habit I'll adapt to for the time being, the junipers will be unceremoniously ripped out of the garden this fall. I haven't decided on a replacement yet, but am determined to exercise some restraint. At very least I plan to selected a shrub that, unlike the junipers, can be easily trimmed to keep it in bounds. 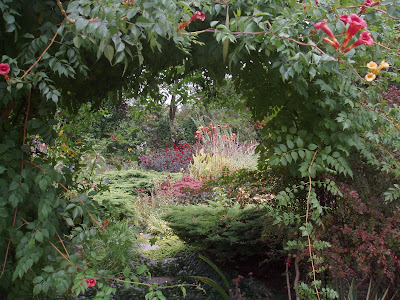 Then there are those species of rampantly spreading perennials that fill a large bare spot so satisfyingly in one season, only to become an invasive nuisance the next. Glyceria Maxima, the lovely striped grass that I planted at the edge of the farm pond, falls into this category as does the variegated Aegopodium in my Blue and White garden. Though in my defense, I didn't actually plant the Aegopodium (pictured below). It must have arrived with some hostas that I had transplanted from a client's garden. Initially, I thought its silver and white leaves were charming so I left in place. Now I find myself tearing it out by the handful. Last year I dug a low trench around it in an attempt to keep its running stems in bounds. I installed trenches around the Glyceria Maxima as well, but as an escape artist its skills rival those of Houdini. I'm afraid that at some point I will have to take shovel in hand and consign every last bit of it to the compost pile. In the end these impulsive choices only make more work for me. I confess that here are times when I feel more like a lion tamer than a gardener. 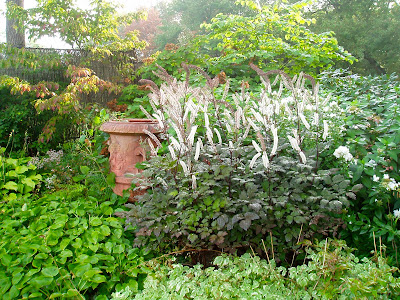 This is all by way of a warning. Heed my advice and profit from my mistakes. Great gardens aren't created in an instant.Don't let your decisions be ruled by impatience and never mistake a lion cub for a house cat. Compact trees and shrubs will generally be smaller when you purchase them than their larger cousins and therefore require a bit more patience. And perennials that have multiple stems bursting out of their pots will likely soon be bursting out of your garden as well. 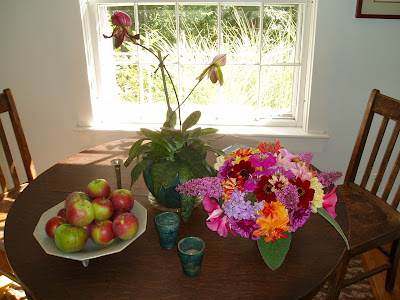 I arranged the bouquet on my kitchen table with flowers I just gathered from the garden yesterday. I made the one pictured below last May. I include it as a reminder that now is the time to purchase spring flowering bulbs (see post entitled Spring Bulbs). Depending upon where you live, tulips and daffodils can planted until Thanksgiving, but late october is generally the best time. I usually start planting mine after the first frost when I begin digging up my dahlia tubers. 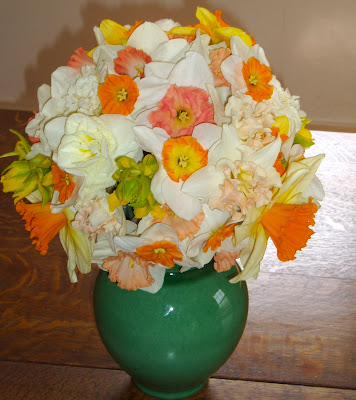