The Root of The Matter 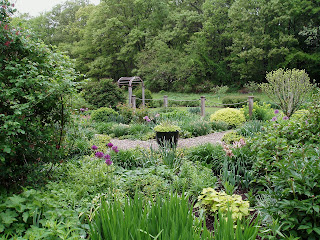 The other day I was overseeing the installation of a garden surrounding a large swimming pool area complete with fire pit, guesthouse and stone patios. I had redesigned the garden for a client who was unhappy with the planting plan created by his original landscape architect. Instead of my usual landscape contractor, a talented man well acquainted with my views on correct horticultural practices, the client, who’s company owns and manages a number of hotels, asked me to work with a landscaper affiliated with his business.

The plant material consisted of low maintenance perennials including grasses, nepeta, coreopsis, alchemilla, and sedum mixed with landscape roses, hydrangeas, rose of sharon, and other summer blooming shrubs. Once most of the stock was set in place the crew set to work. I soon noticed, however, that many of the plants were installed with the top portion of the roots protruding above the soil line.

This is not the first time that I have encountered this particular approach to planting. And though secretly I often wonder if the shallow holes aren’t simply due to laziness, my concern is always met with the same response. The exposed roots will eventually be covered with mulch.

It’s true that in warmer climes, Southern Florida for example, heavy rains may cause rot and plants are regularly installed with their upper roots below the mulch but above the soil line. Here in the Northeast, however, such practices are a recipe for disaster. For most plants mulch is not a desirable growing medium because it must decompose before its nutrients are accessible to feeding roots. Even more worrisome is the fact that mulch spread over the garden in the spring generally breaks down during the summer months. By the time winter arrives the upper roots and crowns are exposed to the elements and cycles of freezing and thawing that may lift plants even further out of the ground.

Mulch and soil are not interchangeable. As a rule roots belong in the ground. Mulch, like icing on a cake, is spread over the soil’s surface. In the case of shrub roses I go a step further and plant the root ball three to four inches lower than the soil line in the pot. I have found that, even after a harsh winter this encourages new growth to re-sprout from below the ground. (Azaleas, Rhododendrons, and Mountain Laurel are an exception to this rule. They actually do benefit from having an inch or so of their roots left above the soil’s surface. It is important, though, to make sure that these exposed roots are covered with a thick layer of mulch in the fall.) 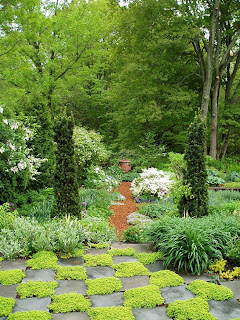 Here in Seekonk, with the exception of a pair of abnormally hot days, May has been uncharacteristically cool and wet. The flowering of the azaleas in my Blue & White garden generally marks the peak of the spring season. This year, due to the unconventional weather patterns, their blooming coincided with my white tree peony, the wisteria, the dogwoods, the lilacs, and the last of the tulips, all of which combined to create a particularly lovely display. 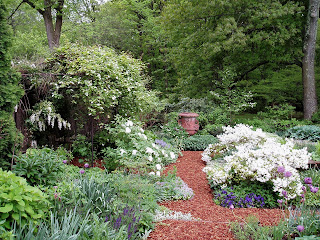 The vine growing on the arbor is Actinidia Kolomikta, a woody climber with small white flowers and showy leaves that flush white and pink as the season progresses. 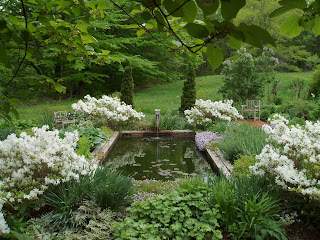 When I first planted the azaleas to anchor the corners of the lily pond they were neat round balls. Ten years have passed and their shape has become somewhat rangy. Last year I toyed with the idea of pruning them to create a more formal look. Azaleas and most spring flowering shrubs should be trimmed as soon as they finish blooming. I think, though, that I will leave them on the wild side for the time being. 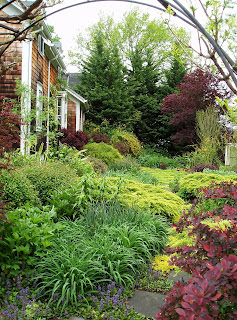 There isn't much blooming in the hot-colored garden at the moment, but the contrasting mix of red and gold leaves creates a burst of color that renders flowers almost unnecessary. 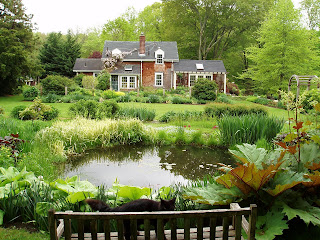 Recently, I did a consultation for a frustrated client who was having a problem with a wet back yard. Most of the plant material that her original designer had selected was doing poorly or had died. My pond is proof that there is no shortage of wonderful plants that thrive in damp or even muddy soil.

For gardeners who enjoy fantasy fiction my first novel, LOST SKY, will be published in 2010.

Happy Gardening.
Posted by Andrew Grossman at 8:05 AM 2 comments: