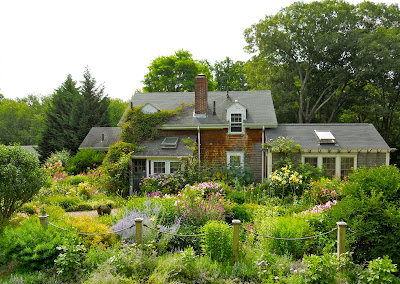 The other day a client who visited my gardens here in Seekonk remarked that my house was like an English cottage. While I don't technically live in a cottage, I think the facade of my house is well suited to the landscape style commonly referred to as a cottage garden. In truth though, the plantings surrounding my home have a bit more structure than is typically associated with the more haphazard cottage look. Over the past few years, however, I have let certain plants self-seed and the result has softened the garden's original design. For the most part these serendipitous additions have enriched the overall effect. I admit, however, that it's a fine line that I'm walking. Recently I've begun to question at what point lush becomes simply overgrown. Although it may be difficult to tear healthy plants from the ground for the sake of aesthetics, heavy handed restraint is required when a good thing becomes too much of a good thing. 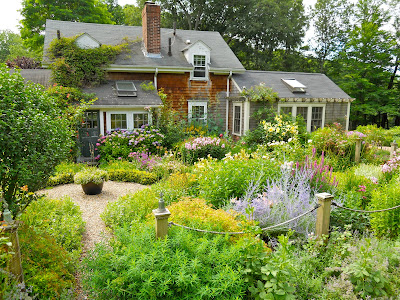 Adhering to a designated color scheme is essential to keeping some semblance of order and intention in the garden. Along the back side of my house the hot colored garden is currently dominated by a stand of lilies the flowers of which were supposed to be yellow with darker rust stripes. Unfortunately as their blossoms mature the petals fade to a color that reads as white. This year I also purchased a batch of copper-colored yarrow. Unfortunately like the lilies its flowers take on whitish tones as they age. 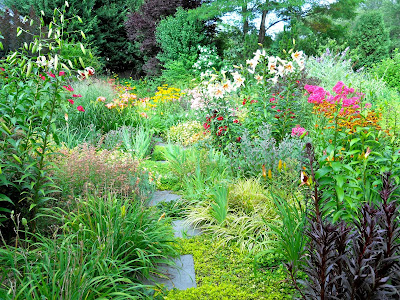 To my eye the white flowers mar the integrity of the garden's design. While there is something appealing about abundance, without the structure of a rigid color scheme the planting looks simply cluttered. I've been tempted to cut the lilies and stuff them in a vase but haven't quite summoned up the nerve. This fall I'll dig up their bulbs and move them to the front of the house where their creamy petals will work to greater advantage. Since I haven't decided how to successfully use a plant with orange flowers that after quickly fading remain white for weeks on end, I may have to consign the yarrow to the compost pile. 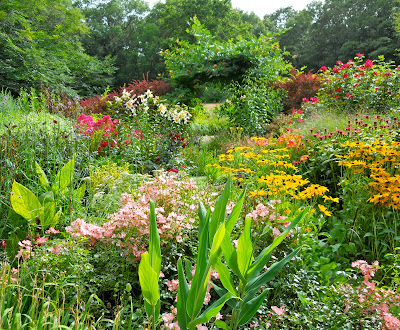 Lately I've been wondering if much of anything is still going to be flowering in my garden come September. Spring in the Northeast arrived a good month ahead of schedule. With the exception of a nail-biting dip in the thermometer in mid-May that had me running my sprinklers throughout the night to ward off the frost, the weather has remained warm. In fact the last few weeks have been downright hot. 2010's precocious growing season is playing havoc with the sequence of bloom that I have meticulously choreographed. This year my lilacs flowered in April and my peonies peaked in May a good three weeks ahead of schedule. Many of the plants that I rely on for color in the late summer and early fall are already in bloom. Even my Autumn flowering anemones are in bud. Of course it's disappointing that once again my best laid plans have been foiled by Mother Nature. My frustration, however, was somewhat eased when this lovely vignette unexpectedly appeared in my Blue & White Garden. 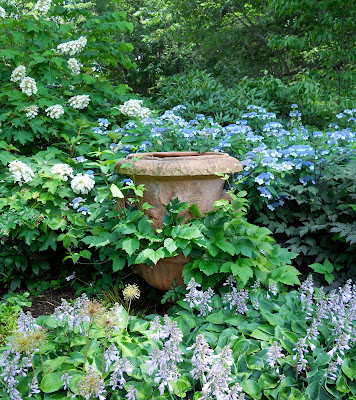 In the past my Oakleaf and Lacecap hydrangeas haven't bloomed at the same time as the low-growing hosta. If the Clematis Heracleifolia that twines around the urn had opened its sky blue bell-shaped flowers ahead of schedule the composition would have been perfect. 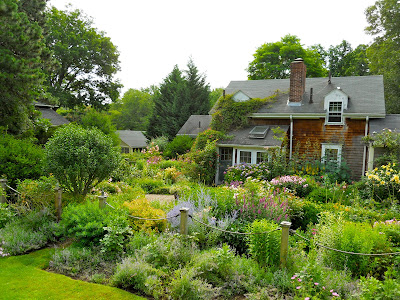