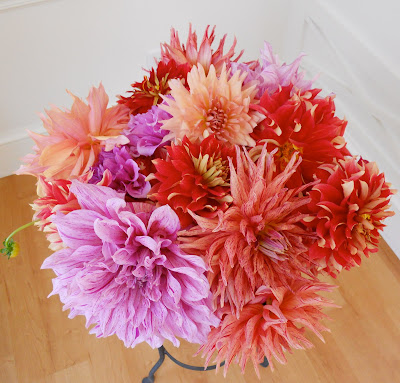 At the risk of repeating myself I must profess that I am exceedingly fond of dahlias. In fact they are probably one of my all time favorite flowers. While my peonies are incomparably lovely, they bloom for but a few weeks and I have yet to discover an attractive way to keep their heavy flowers upright. Many of my roses offer fragrance as well as voluptuous beauty, but the bushes are plagued by a host of insects like Japanese beetles. Invariably by mid-August their leaves are disfigured by black spot and mildew. Dahlias, however, are relatively pest-free and bear blossoms in an almost limitless array of colors, shapes and sizes. Though they have very little scent, they more then compensate for their lack of fragrance by producing an abundance flowers at the tail end of the season when little else is in bloom. 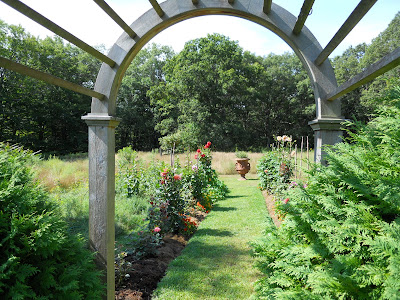 In the past I've restricted my choice of dahlia varieties to those with relatively small flowers the modest size of which compliment the perennials and flowering shrubs in my gardens. This spring, however, I decided to plant a combination of tea roses and dinner plate dahlias in the parallel beds pictured above. Last summer I grew zinnias and Italian sunflowers in these beds and thought this new pairing would make a wonderful combination for cutting. I'd wanted to try my hand at tea roses for some time, but they're too fussy for my perennial borders and my gardens aren't large enough to accommodate the scale of the dinner plate dahlias. 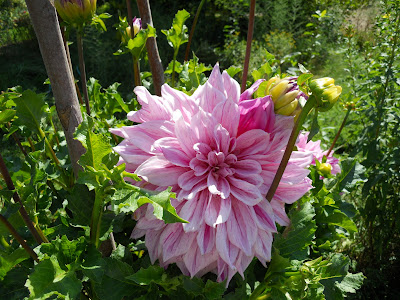 Once the standard requirements of full sun, good soil and a little bone meal are fulfilled, the real trick to growing large flowered dahlias is figuring out how to stake them properly. The blossoms are so enormous (the pink one pictured above is almost a foot across) that their stems invariably snap if they aren't given a good deal of support. A couple years ago I discovered a very attractive solution to this problem literally in my own backyard. 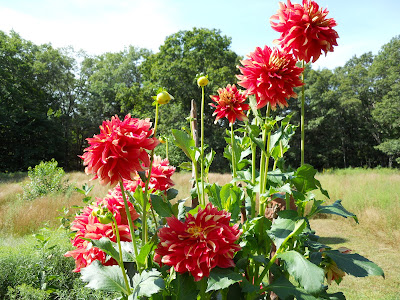 Shortly after I purchased my property a crop of pesky Sumac seedlings appeared in the field behind my house. Sumac is a tenacious, fast growing weed tree and despite persistent springtime mowings the saplings continued to sent up new shoots. 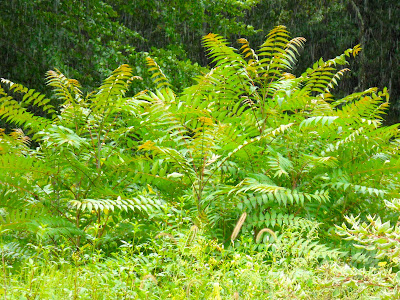 To my dismay each year this new growth has gotten taller and now the towering stems must be cut by hand. A few autumns ago, while sawing down the current crop it occurred to me that the the long straight saplings would make wonderful heavy duty garden stakes. Not only are they more attractive than those available at garden centers, but they have proved to be the perfect sturdy supports for many plants, including my dinner plate dahlias. 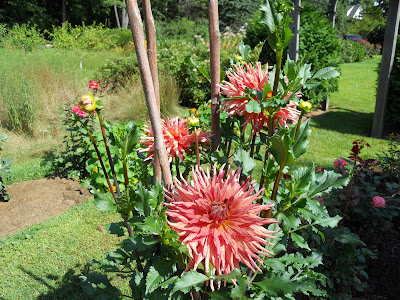 In early May I arranged three Sumac stakes in a tight triangle and planted a single dahlia tuber in its center. Over the course of the summer I've looped twine around the stakes making a tight cage that has successfully held the dahlia's heavy stems in place. As it turns out the stakes are really only good for one season, but out in the field there's already a fresh crop of ten foot tall saplings ready to be harvested. 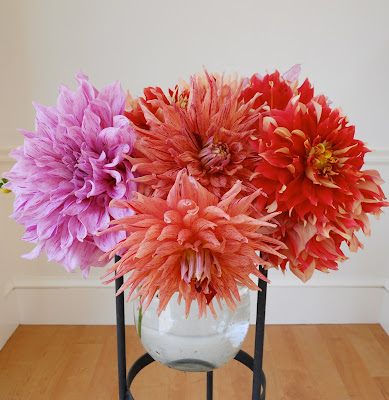 As for the tea roses, I made the mistake of buying cheap bare root plants from a discount store. Of the twenty I purchased only about half took hold. Still I've been encouraged by the fact that many of the survivors have thrived. Next year I'll shop with an eye to quality not cost and focus on fragrance. After all there's nothing like coming home to the sweet smell of roses. 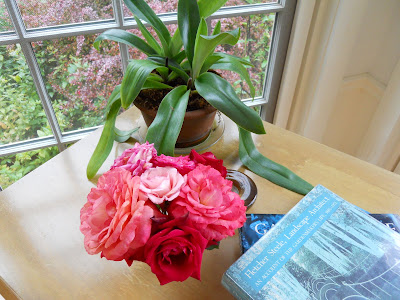