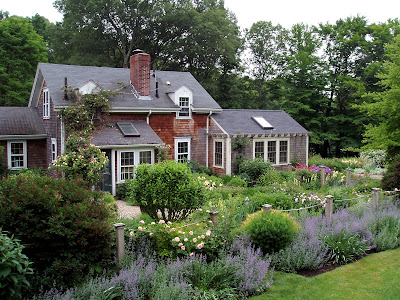 It seems that Mother Nature is a bit confused of late. According to a friend of mine on the west coast, Seattle has been sunny and warm, while here in the northeast one cool, grey, rainy day follows another with no break in sight. Though the dismal weather has done little for my state of mind,I take solace in the fact that at least I haven't had to run my irrigation system. And in truth, the gardens here are veritably bursting at their seams. 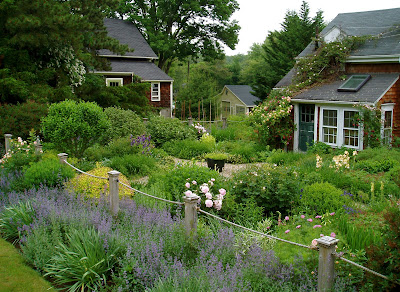 The verdant almost tropical explosion of growth has pretty much cowed all but a few of the most tenacious weeds in my beds. This comes as a bit of a relief since I didn't mulch any of my gardens this year. Normally, I spread a few inches of composted leaves or well rotted horse manure over the beds in the fall. I find this chore easier in the autumn when I don't have to worry about stepping on tender shoots. In the spring most plants easily push their way through the insulating cover. Last year, however, my garden was inundated with snails and I thought that perhaps the winter covering of mulch was partly to blame. Unfortunately, the snails have returned in full force so it seems the mulch wasn't responsible after all.To date I've tried pretty much every snail bate on the market, except for the product recommended by the perennial propagator at my favorite nursery, which after a bit of research turned out to be toxic to pets. Currently, I'm experimenting with diatomaceous earth, a dusting agent made from the fossilized remains of diatoms, a type of hard shelled algae. The dust supposedly abrades the snail's tender flesh. If all else fails, perhaps I'll have to purchase a few new chickens. I never had a snail problem when chickens roamed the garden. Their persistent digging, however, wrecked havoc with the mulched walkways in the blue and white garden and a few years ago I gave them away.I guess it's a question of the lesser of two evils. 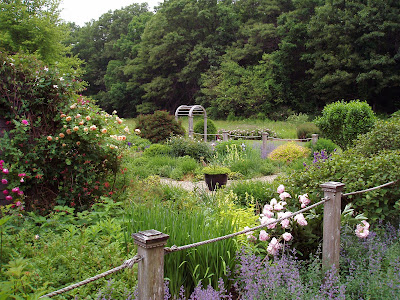 Alchemist, the wonderful, old-fashioned rose growing over my door and at the entrance to the cottage garden is an "own root" rose that I purchased from Heirloom Roses (heirloomroses.com) a few years ago. Most roses available through catalogues or at nurseries are grafted onto a standard rootstock. Own root roses are grown from rooted cuttings that are virus free,longer-lived, more floriferous, and hardier than their grafted counterparts. Their only drawback is that they take a few years to establish themselves. I planted mine in a nursery bed for a year before moving them to the garden proper. 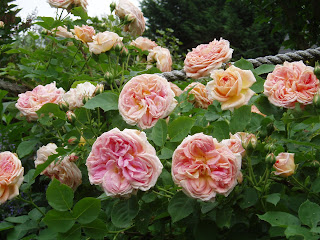 Visitors often inquire about the ground cover growing between the bluestone squares in my checkerboard patio. Originally, I had planted the patio with three different varieties of thyme,but eventually settled on golden thyme, Thymus vulgaris aureus. Unlike other ground hugging thymes, golden thyme puts on some height giving the patio a more three dimensional appearance. I also love the chartreuse color of its leaves, though I'm not particularly fond of the pale pink flowers, which I usually shear off. This brings me to the plant's main drawback. Golden thyme is a rampant grower. It must be cut back once or twice a summer to keep its foliage from completely obscuring the bluestone squares. Trimming is time consuming and a bit tedious. Using a pair of scissors I trim the tops and bevel the edges of each plant much like shearing a hedge. 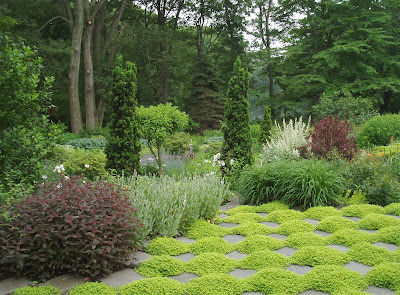 Though I adore the fragrance and look of lavender (and who doesn't ?), I have little success getting the plants to winter over. As a replacement, I rely on the the airy, lavender-like, flowers of Nepeta Six Hills Giant. I've used this nepeta to great affect as an edging in the cottage garden and en masse in the Blue and White garden. Nepeta is a true workhorse that blooms for most of the summer and isn't bothered by pests (including snails). If I could only have one blue flower in my garden, this would be it. 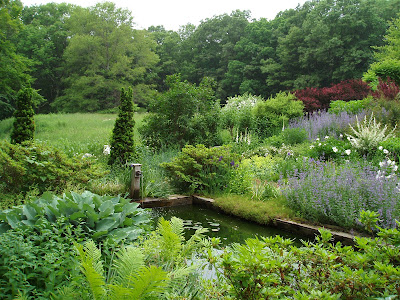 Posted by Andrew Grossman at 6:00 AM No comments: