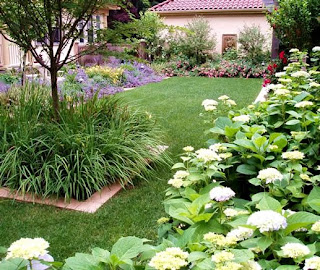 The other day I was giving a consultation to a new client, who had questions about the layout of her backyard. As we strolled toward the perimeter of her sizeable property, she paused at a new planting of large rhododendrons and other shrubs that she had moved from the front the house. Her goal, she explained, was to screen out her neighbor’s adjoining yard. I thought her decision was a good one, but questioned the placement of the shrubs. Instead of massing the rhododendrons together, they were spread throughout the bed. The spaces between them were filled with single specimens or pairs of various other smaller bushes. Upon reflection I realized that I often encounter this type of planting. In fact I have dubbed it the “one of these, one of those” approach to landscape design. And while I understand the thought process that leads to such arrangements, the outcome rarely produces either a satisfactory screen or a visually pleasing composition.

With the exception of the Amazonian rainforest, a unique environment in which the diversity of plant species is high but individual density is low, most ecosystems are composed of species growing in large contiguous groups. In Bennington, Vermont for example, the woodland floor is literally carpeted with hundreds of white trillium in the spring. And in the fields of the northeast, swaths of yellow goldenrod herald the onset of fall. Perhaps even more quintessentially autumnal are the stands of brilliantly colored maples, birches, and oaks, their leaves showing to great effect against groves of dark-needled pine. These species occur en masse for one simple reason. Natural resources are limited and rival species must compete with their neighbors for sunlight, water, and nutrients. In cultivation hedging provides an excellent example of this phenomenon. A single hemlock placed in the middle of a yard will eventually become a towering tree with branches that discourage the growth of other plants in their vicinity. A row of small hemlocks, however, planted four feet apart can easily be trained into hedge. Because the hedge is composed of a single species, its members do not adversely compete with each other. Conversely, if a hemlock were planted four feet from a maple, eventually one of the trees would assume dominance to the detriment of the other.

In addition to satisfying cultural requirements and general ease of maintenance, incorporating mass plantings in a residential landscape design is aesthetically advantageous. Undoubtedly, a number of hydrangeas in full bloom have a more dazzling affect than that produced by a single bush. As a component in the landscape, large groupings also create a more restful composition. Plantings comprised entirely of dissimilar species appear busy and visually confusing. This is because, whether consciously or unconsciously, the viewer must continually assess the differences in height, color and texture. That is why rolling fields, which read as a simple sea of green, tend to have a calming effect on the viewer. And why large perennial borders are often seen to best advantage when backed by a hedge, which provides a continuous green foil for the garden’s various colors and textures.

Of course there are times when a lone specimen can be used to great advantage. As a focal point in the landscape, a single tree or shrub captures the viewer’s attention. In a perennial or shrub border a single specimen creates visual excitement. Of course, a planting composed entirely of competing focal elements would be as jarring as a sentence punctuated with too many exclamations points. Likewise, pairs work much in the same way as parentheses. Whether flanking a doorway or the breadth of a property, a pair of identical plants highlights the elements it frames.

Though it maybe challenging to narrow your selection of plant material, particularly when confronted by the range of choices at the local nursery, the next time you are designing a new planting take a cue from nature. Instead of selecting “one of these and one of those”, try incorporating a large mass of a single species.
Posted by Andrew Grossman at 2:47 PM 2 comments: