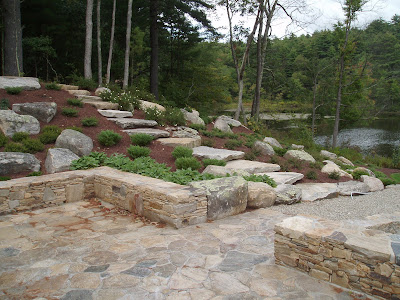 This summer a client, for whom I've done quite a bit of work in the past, asked me to take a look at a new project. He and his partner's historic summer house, a renovated barrel mill, is sited on a wonderful piece of property that includes acres of woodland, a large mill pond, a river, and a waterfall. Earlier that spring my client's mason had begun work on a stone patio adjoining their second floor bedroom and balcony. From the outside the patio would be accessible via a ramp system intended to provide wheel chair access. Once the construction was underway my client realized that he wasn't certain how best to integrate the patio and ramp with the precipitous slope that borders the back of the house. 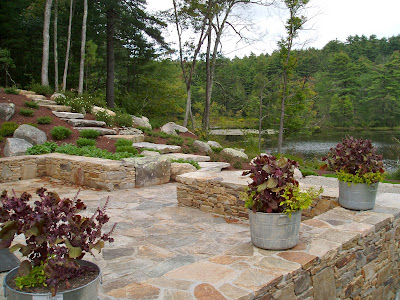 My solution involved constructing a low retaining wall to frame the patio and a large rock garden to retain the embankment. We also decided to build a rustic stone staircase to provide access to the woods above the house. I thought that the formality of the wall, which could also be used for casual seating,would provide an interesting contrast to the naturalistic flow of the rock garden. 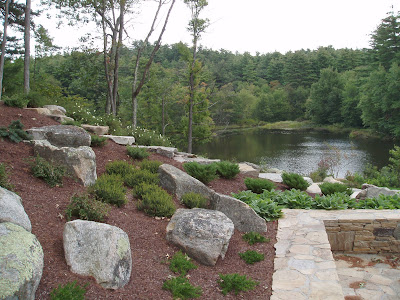 I also thought that by manipulating the grade of the existing slope, the placement of the rock stairs, and the choice of plant material I could visually draw the water closer to the patio. When viewed from certain vantage points, it now appears that the mill pond touches the stairway, though in fact it is some distance away. 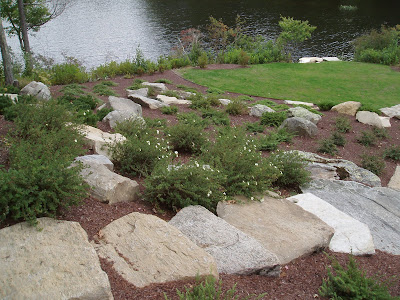 The goal when laying out a rock garden is to create a finished product that doesn't look manmade. In order to achieve a natural effect the boulders must be substantial. Rocks of this size can only be set by a skilled backhoe operator with the help of one or more assistants. I find that the rocks look best when at least a third of their surface is buried beneath the ground. I also like to place them in groups of three or more, though I will occasionally set pairs or single stones. In the past I have installed rock gardens using boulders purchased from a stone supplier. In this case we had the advantage of being able to gather all of the rocks on the site, a luxury which insured that the finished design would blend with the indigenous outcroppings. 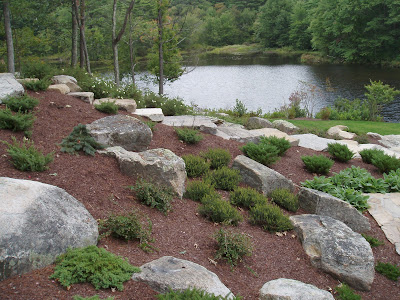 I suggested that we limit out plant selection to low maintenance ground covers like junipers and cotoneasters. In part this was because I had already designed and installed substantial gardens on the property, which require a good deal of upkeep. Additionally, I didn't want the rock garden's plantings to compete with the natural beauty of the woods and pond. For a little added interest I included some low-key flowering shrubs and perennials along with a few choice dwarf evergreens. The garden's color scheme, however, which relies almost entirely on foliage, is predominantly shades of green, silver, and blue.
Though perhaps it looks a bit bare and stark at the moment, I'm confident that once the plantings mature the garden will subtly compliment its surroundings. 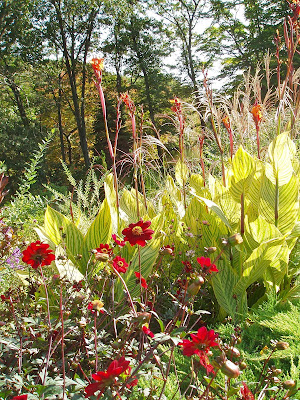 We've had some glorious early fall days here in Seekonk. I only wish my skills as a photographer were equal to the task of capturing the exquisite play of sunlight on the russet leaves and autumnal blooms. Still, I'm convinced that the garden's current incarnation rivals spring's more commonplace charms. 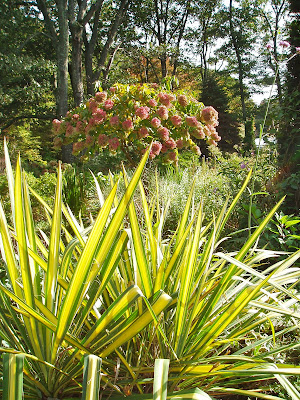