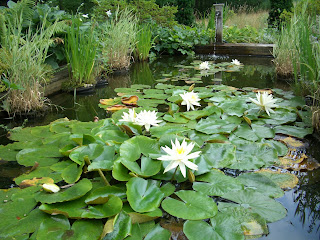 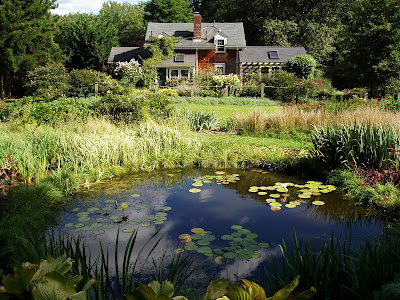 In recent years water features have gained popularity in mainstream residential landscaping and rightly so. Almost no other element adds as much sensory pleasure to the outdoor experience. Whether it’s the sparkle of light on its surface or the cooling sound of splashing on a hot summer’s day, nothing else soothes the senses like moving water. Then of course, for the more horticulturally minded, there is a whole range of beautiful aquatic plants and marginals (plants that grow in mud or very shallow water) to choose from.

Here in my Seekonk display gardens, I have two man-made water features. The first, which I installed with the aid of a landscape contractor ten years ago, is a ten by twenty foot rectangular pool. The pool, which is planted with white water lilies, serves as the centerpiece of my Blue and White garden. The coping for this pool is pressure treated lumber capped with boards that I removed from the old paddock fencing that once bisected the property. The second water feature, which I installed last year (also with the help of a landscape contractor), is twenty feet in diameter and roughly circular. Sited on the other side of the house, it is centered in a patch of field in which I had originally planted a number of apple trees. Unfortunately, a few winters ago, all but four of the trees were girdled by voles and subsequently died. I refer to this newer feature as my “farm pond”. My hope is that, as it matures, it will look like one of those marshy wallows found in cow pastures. Unlike the rectangular pond it has no coping. Instead the open expanse of water is surrounded by a shelf of mud, retained with a combination of steel fencing and filter fabric topped with pieces of turf. The pond is set into a slope and, as the grade rises, the soil becomes drier, allowing me to grow a whole range of marginal plants including Japanese iris, a particular favorite.

The current popularity of residential water features may be attributed in part to the availability of inexpensive, preformed, plastic pond liners and sheets of synthetic rubber, which make the construction of backyard ponds both affordable and relatively simple. Unfortunately this ease of installation has led to the proliferation of water features that resemble miniature golf courses follies. On a garden tour a few summers ago I encountered a fifteen-foot naturalistic, rock waterfall in the center of a completely level circular driveway. Now I’ll admit that every garden relies on a bit fantasy. Still, I often wonder, when I come across this type of water feature, if the homeowner finds the effect convincing. And while I certainly understand the appeal of gazing out the window at a babbling brook, the fact is that on a flat, suburban lot it’s practically impossible to create a naturalistic water feature that doesn’t look like a Disney Land exhibit. Even odder are the rock edged, kidney-shaped, prefabricated pools one often finds set in the ground near an otherwise conventional front door. Here again, the incongruous size, shape, and location of the pond are at once peculiar and unconvincing.

This is not to argue that people, who live in a city or the suburbs, should deprive themselves of the joyful sound of splashing water or the allure of water lily blossoms. Instead of constructing an obviously faux steam or waterfall, why not install a water feature that looks unabashedly man-made? Forgo the kidney-shaped liner edged with rocks and build a circular or square pond framed with a brick or bluestone coping. A pump can still be used to create a jet of splashing water. Lilies and other aquatics will grow just as well and the goldfish will never know the difference. In fact, the overall affect will be more believable and therefore more visually satisfying.

On the home front, here in Seekonk the weather is windy and cold. Nevertheless, the crocuses and snowdrops are blooming and the daffodils against the house are about to open. I’ve re-edged and cleaned all of my beds, cutting back the grasses and perennials along with the thyme in the checkerboard patio. I’ve also pruned many of my shrubs and even some of the sturdier roses, though I’m still waiting for warmer weather before I trim the buddleias, hydrangeas, and caryopteris. I’ve also started some annual seeds under grow lights in my basement in hopes that by May 15th they’ll be ready to plant out of doors. Last week the field was cut and, as is always the case in early spring, I’m hopeful that this year the garden will be more beautiful than ever.
Posted by Andrew Grossman at 6:28 AM 2 comments: