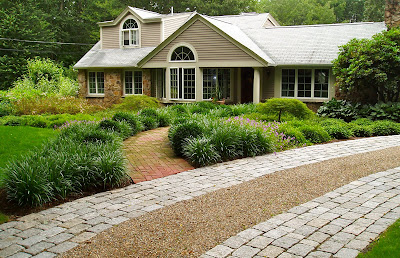 Last week I stopped by the home of a client whose property I had redone a few years ago. In all honesty revisiting past projects can be a dicey venture. Some clients take a lax attitude toward maintenance or implement changes that are incongruous with the original design. In this case, however, I was pleased to see how lush the plantings had grown and how well the maturing design suited the house.

When I first met with these particular clients, a successful lawyer and his wife, a large flowering pear tree obscured much of the house and hid the front door. As is often the case, the foundation beds, which were planted with a hodgepodge of shrubs and perennials, were narrow and poorly defined. The overall affect lent the house a dark and cramped aspect. In addition the orientation of the front walkway focused attention on the side yard instead of the front door ( a particular pet peeve of mine). Its placement in conjunction with the planting scheme accentuated the proximity of a semi-circular, gravel driveway, which further detracted from the beauty of the house. 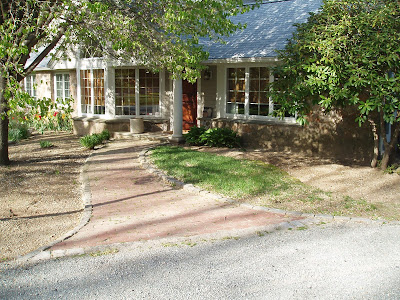 The house, which is much larger than it first appears, is set back from the road on a substantial piece of land. To give it a more proportional frame I greatly enlarged the foundation beds and lengthened the front walkway. Since the clients primarily enter the house through a side door near the garage, extending the entry walk did not affect their day to day lives and allowed visitors a clearer view of the door. Because the house is relatively low and has a lovely stone facade, I selected primarily ground hugging plantings that wouldn't conceal the stonework and added more height on the sides to soften the corners of the house. 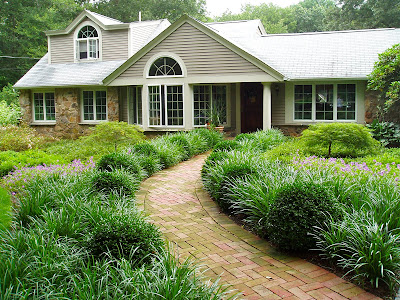 To further draw attention to the front walkway I framed it with widely spaced boxwood balls interplanted with a foil of grassy Liriope. The Liriope remains green for most of the winter and throws lovely blue flowers at the end of the summer. The remaining plantings, all of which are placed in large groups ( except for a pair of low-growing Japanese Maples), include evergreen Japanese hollies and cotoneasters to ensure winter interest along with deutzias, quince, hydrangeas, and roses for color during the growing season. The blue flowers in the photos are geranium Rozanne, a perennial that blooms for most of the summer. 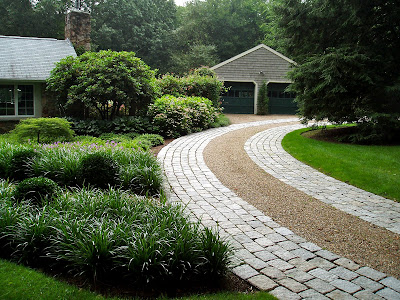 I am particularly pleased with the look of the cobble and peastone driveway. And because cars ride on the cobble bands the peastone remains tidy. Instead of the usual gray gravel, I selected a tan stone ( actually a combination of various browns) that I had seen used to great affect on the walkways in the Tuillerie gardens in Paris. 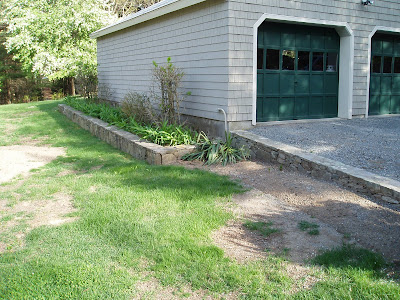 Although, as I have mentioned, the entire property is quite large, the site, which for all intents and purposes functions as the backyard, is situated on a narrow strip of land between the garage and the house. When I began the project there was no visual barrier separating this space from the parking area, which made guests feel as though they were sitting in the driveway. 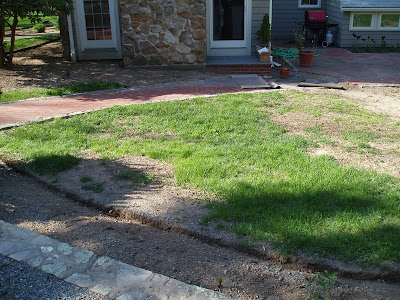 There was also no visual distinction between the front and back yards. An open lattice fence planted with vines alleviated this problem and also beautified the blank wall of the garage. 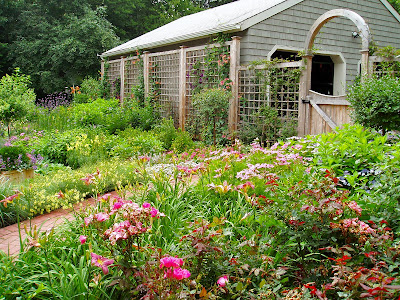 To make the back yard area feel more spacious I removed unnecessary retaining walls and enlarged a small porch attached to the house. The original porch was both awkwardly sited and too small to function as a viable sitting area. To create even more socializing space I installed a pair of interlocking square patios. I find that squares tend to make a narrow yard feel wider. The original design called for three interlocking squares, but the clients were concerned that this would create too much patio space. Subsequently they confessed that we should have included the third square. In all the years that I've been working no-one has ever complained that their patio was too large. 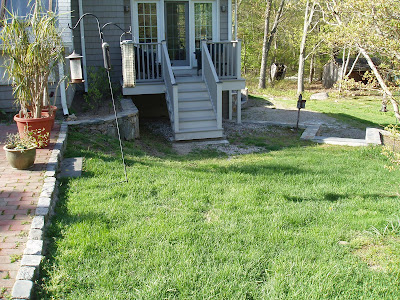 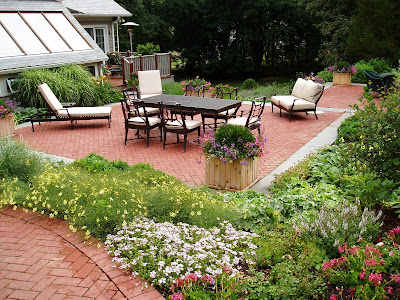 My client likes to garden and so this part of the property is planted with masses of perennials, flowering shrubs, roses, grasses and pockets of annuals all set off to great advantage against the clean lines of the bluestone and brick patios. 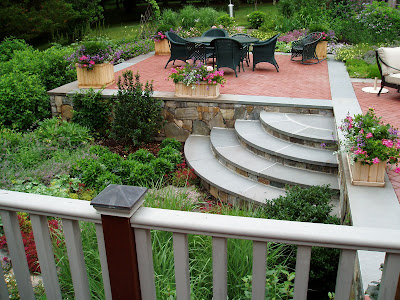 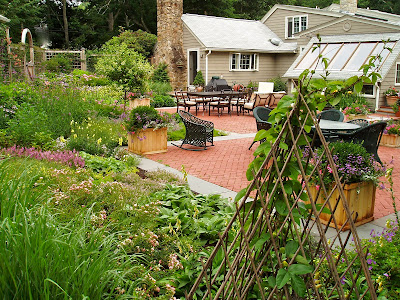 Here in Seekonk things are looking a bit drowsy. My chores these days consist primarily of dead heading and staking. Though despite all my efforts, June's fresh exuberance is definitely a thing of the past.Despite the snails and rainy days there are plenty of flowers to cut for indoor arrangements. Even so,I'm looking forward to September when hopefully the humidity will drop; the sunlight will take on a softer more flattering brilliance and the gardens will catch a second wind. 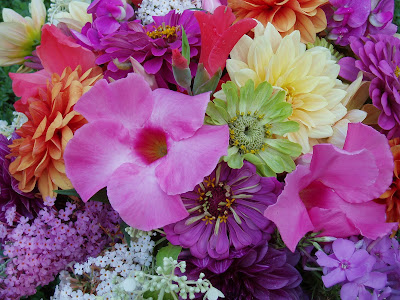