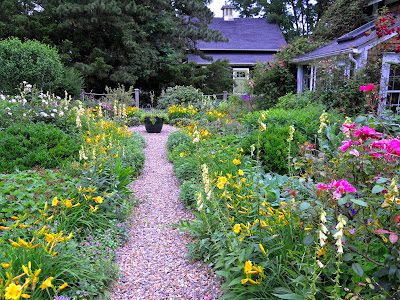 A year or so after installing the cottage garden in the front of my house I decided that it would be nice to edge the walkways with a low-growing border of some sort. I contemplated dwarf boxwood but thought the effect would be too formal. I also considered lavender, but it does not winter over reliably for me. As it happened a client of mine in Darien, CT was in the process of selling her house and asked if I would like to give some of the perennials in her garden a new home. Some years earlier,as a backdrop to her swimming pool, I had installed a red and yellow garden in which I had included a few groupings of Stella d'oro daylilies. Back then Stella's hadn't achieved quite the level of ubiquity that they currently enjoy. Since that time they have become a mainstay of mall parking lots and other commercial enterprises. Their popularity is understandable. Like most daylilies they are tough and easy to grow. They offer a tremendous flush of bloom in June and then continue to flower more modestly until frost. Their foliage is low and grassy and their small albeit brassy yellow flowers command attention even from a distance. It occurred to me that my client's Stella's would make a cheap ( i.e. free) edging plant for my cottage garden and so I separated her clumps into approximately fifty divisions and planted them along my walkways. 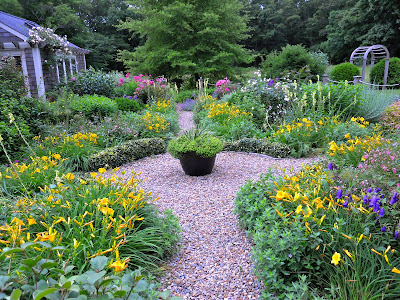 I soon regretted my decision. In spring and late summer the mounds of arching green leaves sprinkled with blossoms were pleasant enough. When the plants burst into full bloom in June, however, the sheer number of flowers overwhelmed the garden and in truth their color was a bit jarring for my taste. The majority of the plants in my garden are not exotic or uncommon. For the most part I select cultivars because of their compositional attributes rather then their pedigree so I don't consider myself to be a plant snob. Even so, each time I'd observe Stella's growing in front of gas stations and shopping plazas I found that I liked them less in my own garden. In fact for years I've been rather embarrassed by their display and in June I'd resolve to rip them out in the fall. Yet once September rolled around and the plants acquired a more sedate charm I'd inevitably change my mind. After all digging out and replacing fifty large daylily clumps is a labor intensive task that requires an outlay of cash. 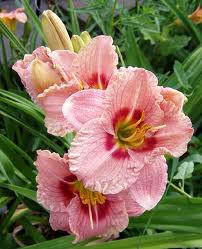 This past August, however, I received a copy of the Oakes Daylily catalogue. Its pages are filled with tempting photos and the inside front cover promises extra-large divisions. Many of you may remember that I'm not a fan of ordering plants through the mail, having been disappointed time and again by the tiny weaklings that arrived on my doorstep. After repeatedly leafing through the Oakes' catalogue I found that I couldn't resist the variety pictured above, Siloam Bye Lo, which Oakes and the internet list as a diminutive repeat bloomer, and so I ordered fourteen to replace the Stella's along the shorter arms of my walkway. To my pleasant surprise the divisions I received were indeed quite generous and as a bonus the company sent me three additional plants for free. I was so impressed that I've decided to bite the bullet and order thirty-five more this week. It will be such a relief to be rid of the Stella's once and for all and greatful friends have been more than happy to take them off my hands. 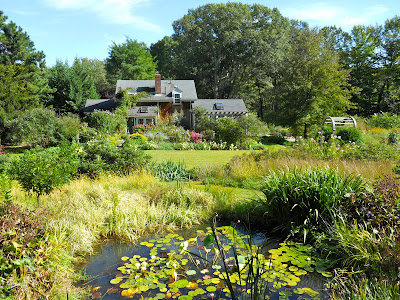 As for the rest of my property in Seekonk, despite the fears I expressed in an earlier post, the front garden at least is holding its own. My asters are blooming as are dahlias, roses, phlox, coreopsis, anemones, and salvias. In the early morning and late afternoon light it still looks quite lovely. 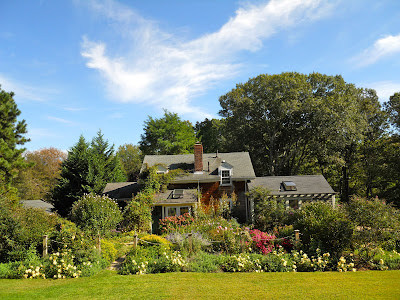 The Hot Colored garden is a bit of tangle, though it still has some color and a certain blowzy appeal. 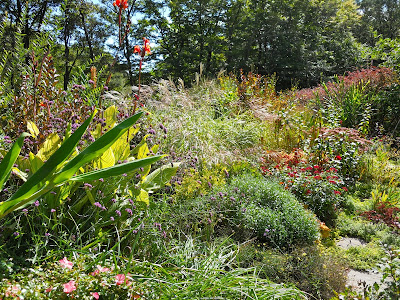 Sadly, the Blue & White garden suffered during this long hot summer. The leaves of the ostrich ferns were completely brown a month ago and I've already cut them to the ground. The hostas are looking tired and there are relatively few plants in bloom. Still from certain angles it's possible to get a feel for its former charm. 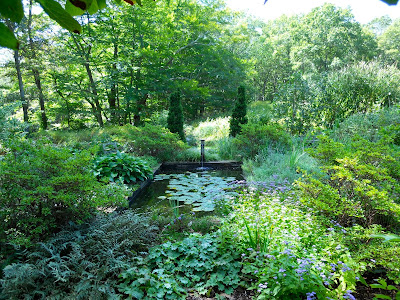