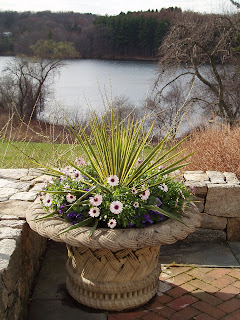 As the weather warms, many gardeners focus their attention on creating colorful displays in pots, window boxes, and other planters. Indeed, for city dwellers or those who live in apartments, containers may provide the only outlet for their horticultural passions. When it comes to selecting outdoor containers, I generally operate under two assumptions; bigger is better and less is more. Small pots have numerous disadvantages. In the heat of the summer they dry out quickly, making it almost impossible to keep up with watering. They also limit the choice of plant material and thus the potential impact of any given composition.

For the purist faux containers will probably always be unacceptable. But for those who would rather not lug heavy stone urns into the garage every winter or for whom budgetary restrictions prohibit purchasing wrought iron, I find fiberglass imitations to be every bit as satisfactory. In recent years the introduction of fiberglass and plastic simulations of stone, clay, and iron has produced a wide selection of lightweight and frost resistant alternatives. The quality of these reproductions has arguably rendered the originals functionally obsolete.

Last fall, an interior designer, who was relocating to Palm Beach, generously gave me two enormous, ornate urns that were copied from a pair found at an English manor house. Because they are made of fiberglass-reinforced clay, I can leave them outside all winter. Even without plantings they add a pleasing sculptural element to the field and garden. 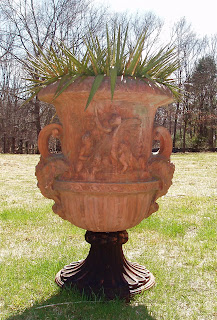 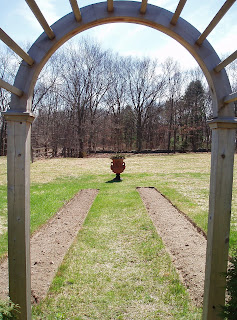 As with the garden proper, the success of a planter is largely dependent on the quality of the soil one uses. Container plants tend to be heavy feeders. Recently, potting soil manufactures have taken the guesswork out of this problem by adding time-released fertilizers to their products. Many claim to feed for up to three months. Ever the cynic, after searching for a date on the package, I found myself wondering “three months from when”? If in doubt, water regularly with a diluted liquid fertilizer.

Choosing plants for your containers has become more interesting in recent years. Many nurseries and box stores now carry a wonderful selection of annuals and tropicals for both sun and shade. When assembling your own compositions, however, don’t be led astray by the luscious photographs in many of today’s gardening magazines. Though it requires a skilled eye, it isn’t difficult to make a pot look beautiful for a photo shoot. I always wonder how these artful arrangements will look in a week or so when the delphiniums or other perennial showstoppers have finished blooming. In reality many of these designs are nothing more than glorified flower arrangements. Unless you plan on reworking your pots every few weeks, I would avoid using such photos as a template.

In general, I advocate a simple approach to selecting plant material for containers. Most importantly, I choose specimens that will provide at least three months of flower or foliage impact. Because most plants that tolerate cool weather flounder in the summer heat, I redo my urns three times a year. Here in the Northeast the first planting takes place in early April, the second after the fourth of July, and the third before Halloween. When planting a large urn for the summer months, I usually build the design around a tall, central focal point, often tree formed or topiaried. Hibiscus and Oleander are good choices, but there are many others as well. I surround this central element with mid-height flowering plants, usually restricting my choice to two varieties, perhaps lantana and dwarf dahlias. Finally, I add trailing plants like scaevola , ivy leaved geranium, and helichrysum to soften the edges of the container. As with a garden, I always consider color scheme before making my final choices.

The urn pictured at the top of this page, which I planted for a client last week, is filled with blue pansies, pale whitish-pink osteospermum and a single gold sword yucca, all of which can tolerate light frost. The yucca, which is hardy, can be transplanted to the garden if I choose to replace it in the summer. While many garden catalogues suggest using dwarf flowering shrubs in containers, I usually avoid hardy shrubs and perennials because for the most part their season of bloom is simply too short. On the other hand, one of the great advantages to planting urns is that it’s easy to empty the container and start from scratch.

Here in Seekonk, the gardens are really getting underway. 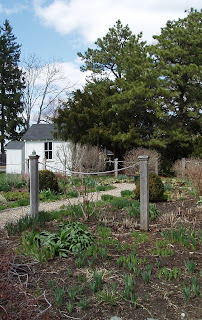 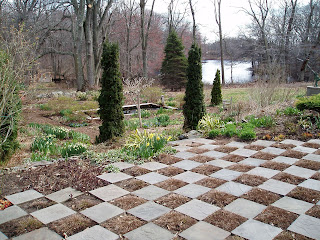 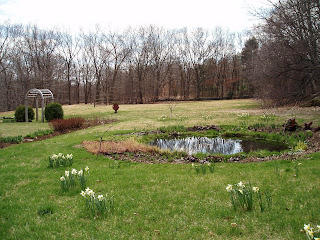 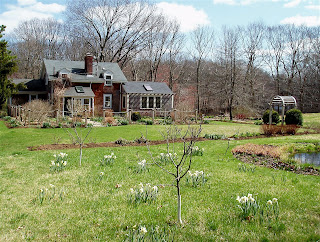 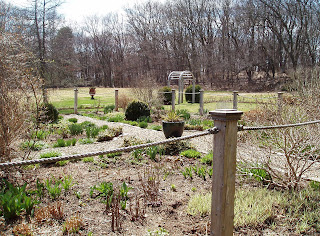 Every fall I plant a few hundred daffodil bulbs so that I can enjoy the flowers in the garden and still have enough to cut a few for the house. 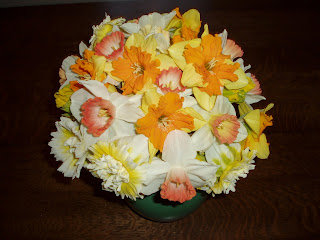 I was most excited to see that the Rheum Palmatum var Tanguticum that I planted near the pond made it through its first winter. This plant, which is an ornamental rhubarb, has enormous leaves with a beautiful red reverse. I thought it would look particularly striking reflected in the water and am looking forward to seeing it reach it's full size this season. 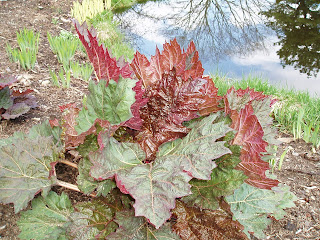